The Cutaneous Lymphoma Foundation originated from one feeling:  Frustration.

When Judy Jones (pictured above, right) was diagnosed with cutaneous T-cell lymphoma (CTCL) in 1990, she went from feeling that her world was falling apart to learning to live with the disease. Her search for information to help her with this journey turned quickly to frustration - she had never heard of CTCL, knew no one else with CTCL, and could find no information. Judy wondered how other people were coping with a disease about which they knew nothing. In 1996, she created and went on-line with the CTCL-MF Listserv, an online support group. The listserv grew fast as the word got out, as the Internet increased in size and people became computer literate.

Meanwhile, Judith Shea's (pictured above, left) husband, Lee Allen Cohen, was diagnosed with Sézary syndrome in 1994 and passed away in 1996. Once again, frustration abounded. Frustrated by the lack of information and support during her husband's illness, Judith created the Lee Allen Cohen Fund in his memory. Her goal was to find a way to use this legacy to provide information and support to others with CTCL diseases. Mr. Cohen's physician was Dr. Stuart Lessin (pictured below, left), a dermatologist treating CTCL patients in Philadelphia, and Judith met with him several times to discuss ways to reach her goal. 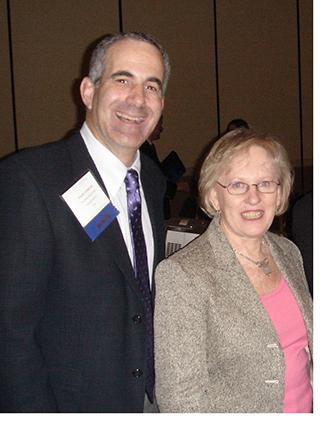 In 1998, Dr. Lessin was also frustrated. He felt that a patient advocacy group could call attention to the needs for education and research in this field. After receiving information about the CTCL-MF Listserv from one of his patients, he called Judy Jones and suggested that she consider starting a foundation. Remembering Judith's goals, he also called her to discuss the idea of a foundation for cutaneous lymphoma patients. Dr. Lessin then suggested that the two "Judys" talk and consider attending the upcoming American Academy of Dermatology (AAD) meeting to assess the support of other physicians. During the AAD meeting, they met with the International Society of Cutaneous Lymphoma (ISCL) and other patient advocacy groups and determined that, yes, this foundation was needed.

Using the funds from the Lee Allen Cohen memorial as seed money, a foundation was created. Frustration had found its purpose and the Mycosis Fungoides Foundation was founded.

In 2005, in order to step up its efforts to provide accurate information, the Mycosis Fungoides Foundation became the Cutaneous Lymphoma Foundation.