Stories of Help and Hope 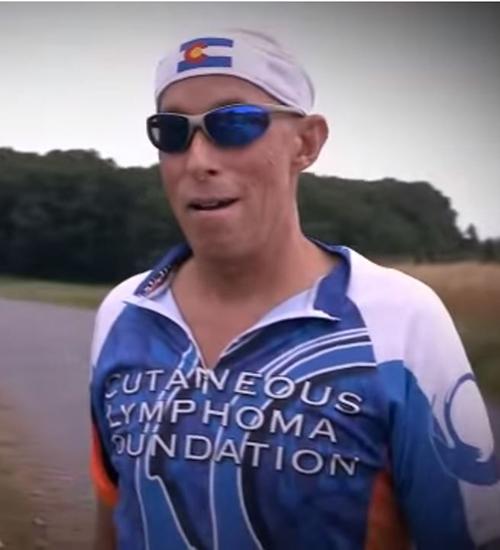 Neil Dicker, who has spoken at two of the Foundation’s Patient Educational Forums, marked his third year of remission in May of 2012.

"It can turn out this way," says Dicker. "Never give up."

Q. What was the prognosis seven years ago?
A. Online research showed a life expectancy of about 100 months, and I accepted that. My symptoms had escalated for a year by the time I was properly diagnosed and referred to Dr. Alain Rook at the University of Pennsylvania, an outstanding CTCL specialist who's on the Medical Advisory Board of the Cutaneous Lymphoma Foundation.  He described long-term success with patients receiving conventional treatment for seven to ten years.

Q. What approaches were used?
A. For three months we tried total skin electron beam radiation, a very challenging treatment. Then came a series of biological treatments that included photopheresis and later injections of Intron A and B and Leukine, along with oral Targretin. Topically, I used Carmustine ointment and all of the corticosteroid ointments.

Q. What was your life and outlook like?
A. I sold my practice and retired from dentistry in spring 2005. It was increasingly clear my condition was getting worse as the level of cancer cells in my blood increased. I was tired of seemingly endless treatment and became despondent about being chronically ill.

I began researching a stem cell transplant. In 2008, Dr. Rook referred me to Dr. Alison Loren at the Hospital of the University of Pennsylvania, who explained the process. There were no family matches, although I have four sisters, but the hospital's transplant coordinator found several potential donors.

Q. What was the turning point that followed?
A. I agreed to the transplant process after a year of soul-searching and discussions with my wife Linda and our four children. In August 2009, stem cells were infused into my body – a 20-minute procedure on the sixth day of a 22-day hospitalization. Linda and I then lived part-time in a Philadelphia apartment for several months. There were tense situations, but I never had to be hospitalized again. Over time, I felt stronger. And I was in remission!

Q. How long did that status continue?
A. Just over half a year. By spring 2010, tests showed the transplanted cells weren't engrafting properly. It was clear things were not 100 percent, though I resumed biking and other activities.

That fall, tests showed the transplant might be failing, although I was still in remission.

Q. You and the doctors weren't out of options, right?
A. Definitely not. That November I received a DLI [donor lymphocyte infusion] from the same donor, whose identity I still didn't know. An anonymous stranger had given me the ultimate gift of time and life.

I was excited, but also very afraid of the DLI. It could fully integrate the transplant, but carried the risk of life-threatening GVHD – graft-versus-host disease.  Both occurred.

Within six weeks, stem cell integration went from 48 percent to 100 percent. I became very ill from GVHD, but wasn't hospitalized. Strong corticosteroids and immunosuppressant drugs, good physicians, family support and good luck all brought recovery. It was heads or tails for a while, and the coin landed up for me.

I also hit the lucky odds another way. The Gift of Life Bone Marrow Foundation picked me to meet my donor at a fund-raising dinner in New York. Last May on center stage at the Grand Hyatt, Linda and I met Arielle, the 26-year-old woman who volunteered for an international genetic registry and whose stem cells saved my life. Without her, we wouldn't be talking.

Q. How are you doing now?
A. The transplant is 100-percent integrated and there is no sign of cancer. My skin is completely clear and I have no CTCL symptoms. I'm off all medication for this disease and transplant-related issues.

I enjoy every day.  This summer I'll ride for five days in an event called Bike Virginia and will travel to Lake Placid, N.Y. In October my wife and I will go to Paris to celebrate our 25th anniversary and my 65th birthday.

Q. How have you changed?
A. I've traveled from being a cancer patient with a very questionable prognosis to a person who is cancer-free. That's why I want to help other people through the Cutaneous Lymphoma Foundation by talking about the stem cell option, which isn’t well-known. I encourage anyone who is a candidate to consider it.

In the Tour de France, a polka dot jersey is awarded to the best hill climber.  His qualities include perseverance, persistence and courage. I have my own polka dot jersey, and although I didn’t win it in a race I'm still proud of it.  I fought my cancer with those same qualities and I encourage all those with CTCL or any cancer to do the same.

Stay positive, stay strong and seek out the best medical advice you can find.

Dr. Neil Dicker welcomes inquiries from anyone seeking a patient's perspective. He can be contacted at ruach1@aol.com.